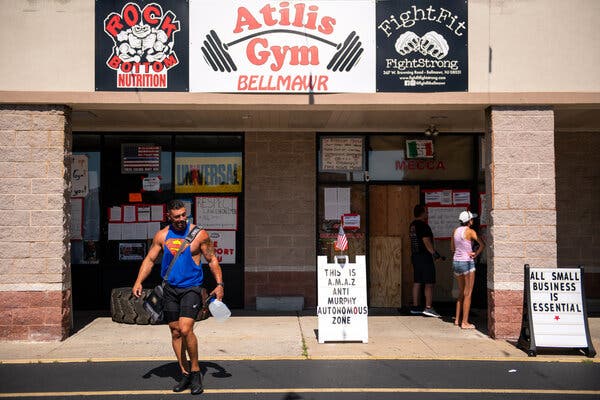 In an act of defiance, Joe Logue, a retired Marine, affixed a military gas mask and headphones before beginning his chest-and-arm workout at a New Jersey gym that had gone rogue.

It is illegal for health clubs to be open for anything other than private training sessions in New Jersey, one of only seven states where gyms have been deemed to be so high risk for spreading the coronavirus that they remain either fully or partially closed.

But the owners of Mr. Logue’s gym, Atilis, about 10 miles southeast of Philadelphia in Bellmawr, have repeatedly flouted the governor’s executive order, filing a lawsuit that sought to overturn the shutdown while staging numerous reopening events that are equal parts civil disobedience rallies and publicity stunts.

Mr. Logue was one of the first people to enter the cavernous gym on a recent Saturday morning after owners kicked down plywood that had covered the space where the doors — removed so they could not be padlocked — once stood.

“This is my release,” said Mr. Logue, 28, who said weight lifting had helped him chase away demons that had dogged him since he was injured in 2012 while on duty in Afghanistan. “I was basically drinking every night, fighting. I was getting in a lot of trouble.”

Atilis’s persistent pressure underscores the growing tension between Gov. Philip D. Murphy and another group of business owners in dire straits because of the outbreak: gym owners struggling for survival after nearly five months of a mandated pandemic lockdown.

Licensed health clubs are among the last types of businesses that will be allowed to reopen, and the governor has shown few signs of relenting. Similar pressure is mounting in New York, where last week Gov. Andrew M. Cuomo, who has been sued by a group of health club owners, called gyms “highly problematic” and said they would remain closed for now.

Doctors and scientists seem to be in broad agreement that significant risks are posed by performing intense exercises indoors, which could produce high concentrations of the virus, and by equipment that is touched frequently. Two clubs in New Mexico have been linked to a small number of virus cases.

“It’s mostly about ventilation, air movement,” said Dr. Joshua L. Santarpia, a professor at the University of Nebraska’s Medical Center who studies bioaerosols and has conducted research on the coronavirus. “The smaller particles are going to move with the air flow.”

Last Thursday, state senators in New Jersey held a hearing on the subject, adding to the growing clamor at a time when the rate of coronavirus transmission in New Jersey had risen slightly, a worrisome trend the governor blamed in part on indoor parties among young people.

The state’s transmission rate, a key benchmark, dipped back below 1 on Monday, indicating that each infected person was passing the virus to fewer than one other person.

“It’s a dire situation and they are desperate,” Andrew Alfano, chief executive of Retro Fitness, testified at the Senate hearing about the financial hardship of the five-month closure. “These are people who will never financially recover.”

Some gyms have moved weights and exercise classes outside to sidestep the rules. Other health clubs are liquidating and selling off equipment online. On Monday, a judge ruled for the second time against Atilis, ordering that the doors that were kicked down less than two weeks earlier be barricaded anew.

The owners, whose business license was revoked on Tuesday by the borough of Bellmawr, have vowed to continue to press their case in court with help from contributions from nearly 4,000 donors.

There are an estimated 40,000 to 50,000 health and fitness clubs in the United States, including more than 1,100 in New Jersey, according to the International Health, Racquet & Sportsclub Association, a nonprofit trade group.

At least 43 states have allowed gyms to reopen in some or all parts of the state. But the association estimates that clubs nationwide have lost $7 billion through July 1, and that a quarter are in danger of closing for good by the end of the year without additional federal funding.

A research paper by MIT’s Sloan School of Management in May that weighed a business’s risk of reopening against its societal benefits ranked gyms near the bottom, concluding that “gyms, cafes, and liquor, tobacco and sporting goods stores should face tighter restrictions and open later.”

In New Jersey, however, liquor stores were deemed essential and never ordered to close. Exercise studios that offer other high-intensity indoor activities like dance, martial arts and gymnastics, in classes that tend to draw children, were allowed to reopen at reduced capacity last month. The governor has also permitted sports like football to begin full-contact outdoor practices.

All of it smacks of inconsistency to Frank Trumbetti, who bought Atilis Gym last June with his business partner, Ian Smith.

“We shouldn’t have to fight this hard to fight for our rights,” Mr. Trumbetti, 51, said. “I don’t comprehend the lack of equal application of the law.”

His mother, Lucia, who was 77, died of Covid-19 in May after being hospitalized for an unrelated ailment, and he said he respected the potency of the virus.

With each reopening, Atilis said it had been adhering to a reduced occupancy limit of 44. Each visitor was given a disinfectant spray bottle to wipe down equipment before and after use. Temperatures were scanned at the door. Masks, however, were optional.

Mr. Murphy, who backtracked on his plan to permit indoor dining as cases began to surge in other states that reopened early, has said it is simply too soon to open gyms in a state where 15,878 deaths have been linked to the virus.

On Monday, after the judge ruled against Atilis, the state’s attorney general, Gurbir S. Grewal, said he took “no pleasure in this process.”

“But we’re in the middle of a global pandemic and defendants have defied multiple court orders,” Mr. Grewal said in a statement. “If we’re going to prevent a second wave of Covid-19 in New Jersey, we need everyone in this state — including gym owners — to do their part and follow the law.”

Gym owners and managers who believe it is time to relax Mr. Murphy’s executive order stress the mental and physical health benefits of exercise. They maintain that there is little difference between their businesses and martial arts, dance and gymnastic studios, which have been operating in New Jersey at 25 percent capacity for more than a month with no reports of an outbreak.

At a facility Fitness and Wellness operates in Pennsylvania, which reopened in June, people with ailments that would put them at high risk if they contracted Covid-19 are determined to use exercise as a way to build their strength, she said.

“They’re the first ones in the door because they are so fearful of their health declining,” Ms. Adelman Banks said during last Thursday’s hearing. “Our M.S. patients. Our Parkinson’s patients. Our cardiac patients.”

“We are a safe haven for them,” she added, “and without coming to us they’re not exercising.”

All students are required to wear masks. And the studios are misted with a cleaning solution between classes, which are staggered so that the equipment has time to dry, he said.

Jenna Varano, program director at South Jersey Storm Cheerleading in Deptford, said summer camps are up and running and competitive cheerleading squads are practicing with fewer students, heightened safety precautions and waivers that must be signed every two weeks by parents.

“People were reluctant at first,” Ms. Varano said in an interview. “But I think people realize we are doing everything we can. They feel safe.”