Pick the one that suits you best.

Looking for weight-loss strategies that actually work? Clear through the clutter and add these trusty hacks to your kilo-kicking armour – tried, tested and approved by the experts.

To see how servings have grown over the past 50 years, check out your grandparents’ wedding plates, suggests Clare Collins, professor of nutrition and dietetics at the University of Newcastle in Australia. “You might think they’re side plates because they’re so small, but those were the real serving sizes,” she says.

A 2016 Deakin University study saw people who were given large plates eat 44 percent more than those with dishes half the size. So, try reducing the size of your plates to reduce the size of your servings.

READ MORE: These Nuts Might Actually Help You Lose Weight

Some pros recommend having the majority of our daily food at brekkie, while others reckon skipping it altogether will help you drop kilos (looking at you, 16:8 intermittent fasting). But the general consensus falls with the first option.

“In the long-term, having regular meals, including breakfast, is a really helpful strategy [for weight loss],” says Collins. She points to the National Weight Control Registry in the US, a long-standing study of people who have lost an average of 30 kilos and kept it off for more than five years. “[Eating breakfast] is one thing these long-term successful people do.”

Chuck eggs or beans on your plate to dial up the protein: eating more of the macro at brekkie can support a healthy slim-down by keeping cravings in check over the day, reveals a 2018 Commonwealth Scientific and Industrial Research Organisation report.

All that said, don’t force food down if eating first thing really isn’t your jam (on toast). “Some people might not feel hungry in the morning or it may make their stomach upset. If that’s the case, try a later breakfast or larger morning snack,” says dietician Stefanie Valakas. Brunch for the win.

Head for the Med…

For the delicious grub as well as the European summer. The Mediterranean diet was ranked the best diet of 2018 by US News & World Report, based on nine categories, such as how easy it is to stick to and the likelihood of losing weight on it. The approach is characterised by heaps of veg, fruit, seafood and legumes and smaller amounts of meat and dairy. Plus, of course, those healthy fats in things such as fish and olive oil.

“I use it as a tool for people who already consume a high-fat diet and just convert the types of fat to extra-virgin olive oil, nuts, seeds and avocados,” says Valakas. The other bonus? “It focuses on the social aspect of eating,” she adds. “Making [meals] more social will keep your attention on how you’re feeling rather than mindlessly eating.”

We’re subtly being pushed to eat or drink everywhere, whether it’s by the fast-food ad at the bus stop or the two-for-one special at the supermarket checkout. Not ideal, since exposure to food cues significantly influences eating behaviour and weight gain, according to a 2016 Yale study published in Obesity Reviews.

To manage your long-term kilo count (and outsmart those sneaky food juggernauts), start to manage the potential pitfalls around you. “The more you are aware of [food cues], the more you can say, ‘Hey, I had a slip-up today because this environment sabotaged me,’” says Collins.

Recognising environmental triggers is the first step and then you can find a strategy. “For some people it’s diversion (phone a friend or walk in the opposite direction); for others, having an alternative to the food cue (like an apple instead of a chocolate) really works.”

Sleep is a scientifically proven weight-loss strategy. A study in Nature Communications found people who’d had a full night’s rest preferred healthier foods than their kip-deprived companions who craved junk.

Need more? US researchers from Stanford University tested 1 024 volunteers and those who hadn’t clocked enough sleep had elevated levels of the hunger hormone ghrelin and reduced levels of the satiety hormone leptin – meaning they were more likely to eat more, more often.

The takeaway? Switch off Netflix and hit the hay. You know the tricks (dark room, no tech), but also try telling yourself to stay awake while in bed. Sounds weird, but a study in Behavioural and Cognitive Psychotherapy reports that people who did this actually found it easier to fall asleep and had less anxiety about the process.

Mindfulness really does deserve the royal-wedding-level hype – it’s as good for your waistline as it is for your headspace. Just take the intel from a 2013 review in The American Journal of Clinical Nutrition: people who ate while distracted (watching TV, scrolling Insta) consumed 10 percent more kilojoules during the meal and 25 percent more later in the day than those who paid attention to what they were eating.

Um, we’re sold – but how? “It’s about not seeing eating as another task on a long to-do list. Instead try setting a little bit of time aside for yourself to enjoy food,” says Valakas. Focus on enjoying each bite and tune into how you feel while eating. “Ask yourself how full you feel during the meal instead of feeling obligated to eat whatever’s in front of you. Eat until you feel content, not stuffed.”

Yeah, you’ve heard it before, but interval training really is your superhero here. Researchers from the University of New South Wales in Australia agree it’s an effective weight-loss strategy for women: subjects who did intervals for 20 minutes, three times a week, trimmed down faster than steady-paced exercisers who worked out for twice as long.

Intervals prompt excess post-exercise oxygen consumption – because you’re working so hard during your sesh, you can’t breathe quickly enough and so your body works anaerobically (without oxygen). “It’s priming your body to burn fat later in the day to repay this debt that you’ve created in your session,” says Harrisberg. Meaning you experience an “afterburn” effect, torching kilojoules hours after you’ve finished training.

In the pro corner: weigh-ins can be useful motivators. In fact, a 2016 study published in the International Journal of Obesity found adults who weighed themselves daily lost more weight than those who didn’t. But on the anti-side, many experts are wary to recommend hopping on the scale every day.

Weight management psychologist Glenn Mackintosh often notices that once clients take their focus off the numbers, they feel happier. “Learn to enjoy movement and healthy eating not as a weight-loss behaviour, but as a thing that our bodies are designed to do,” he says.

If you stick with the scale, weigh yourself at the same time every day and be aware of patterns over time rather than letting a spike get you down. But if it makes you feel demotivated or stressed, measure change via other factors: your jeans feeling looser, running up the stairs sans puff or feeling more energised.

READ MORE: 5 Ayurvedic Tips To Speed Up Your Metabolism And Flush Toxins

Crash dieting is a surefire way to derail your goals. “Your body wants to maintain homeostasis; it wants to stay the same. So if you cut kilojoules your metabolism goes, ‘We’re losing weight really fast here; we’d better slow the hell down,’” warns Harrisberg.

The result? Your metabolism takes on a snail’s pace, then struggles to adjust when you increase your food intake again. Hello, weight gain. So, make small changes to your diet that you can sustain over time. Valakas’ general rule is to aim for half to one kilo of weight loss per week. Slow and steady wins the race.

Pumping iron may not blast the kilos like cardio (a 2012 study published in the Journal of Applied Physiology found resistance trainers lost less weight than cardio bunnies), but that’s not a bad thing: what you lose in fat, you gain back in muscle mass.

Why this helps with long-term weight loss? The higher your muscle mass, the higher your resting metabolic rate (that is, the amount of energy you burn doing nothing at all), explains Harrisberg. “Resistance training is a way of depleting glycogen from the muscle, which then makes space for the carbs you eat, rather than your body saying, ‘Okay, we’ve got excess, let’s convert it to fat.’” In short, more muscle equals more kJ torching power. 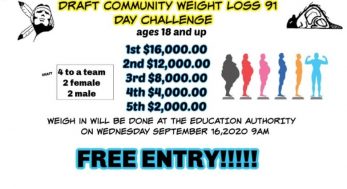