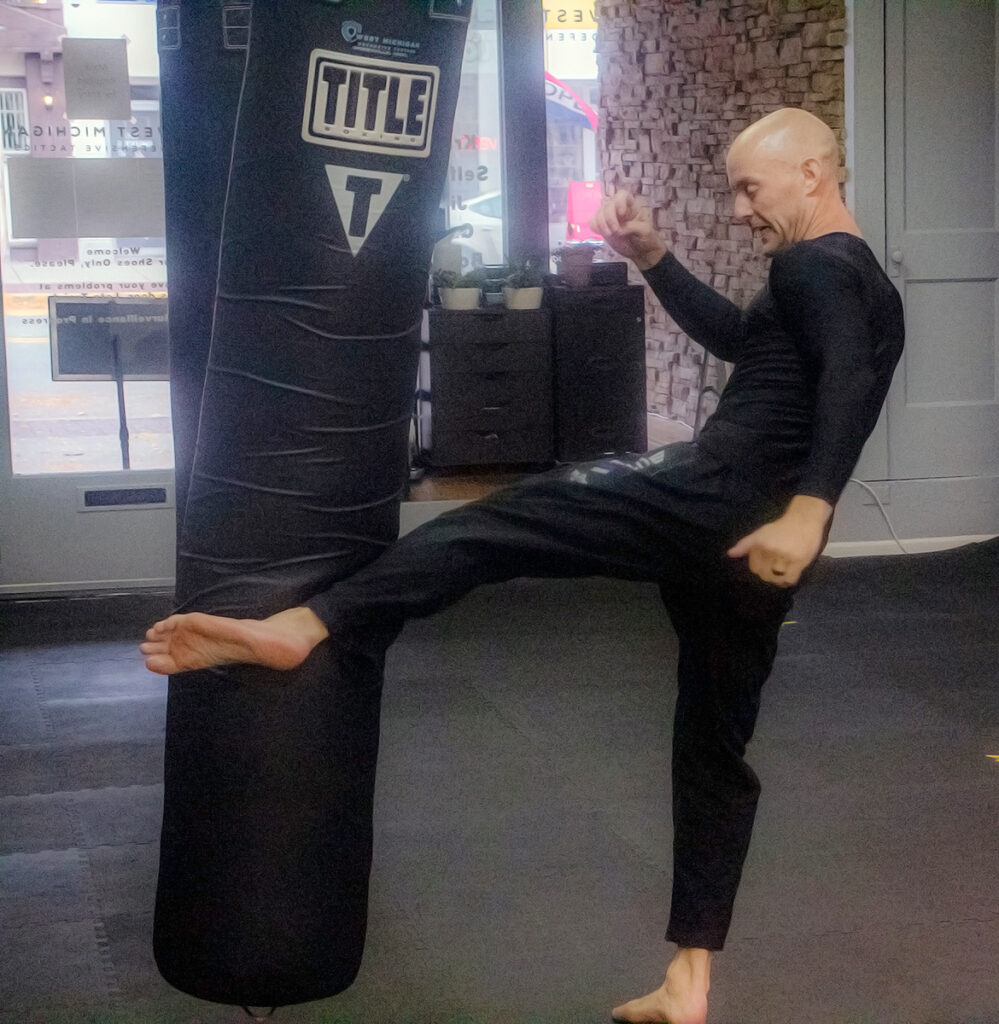 Alec Dakin demonstrates a cardio kickboxing move during one of his classes at West Michigan Defensive Tactics on Wednesday. — DN Photo | Brandon Schreur

“There are a lot of cultures in MMA and similar stuff that’s very ego-oriented,” he told the Daily News. “I don’t want that for this place.”

Rather, Dakin opened West Michigan Defensive Tactics at 200 S. Lafayette St. in Greenville with the hope that people would come to learn practical skills only to be used in certain situations.

“I want this gym to be inviting to everybody of any size, shape, color or creed. Whoever you are, I want you to feel comfortable coming here,” he said. “We’re not going to be an MMA competition gym or anything like that. We might be a gym where people compete in jiu-jitsu, but the main goal is really about learning how to defend yourselves on the street and in real-life situations.”

Since then, Dakin says he and his team of instructors have started offering a number of self-defense and fitness-related classes to the community — including everything from Brazilian jiu-jitsu and boot camp to cardio kickboxing and yoga.

Dakin says one of the gym’s primary focuses is teaching Krav Maga, which is a self-defense type class focusing on mindset, lifestyle and ever-changing systems. 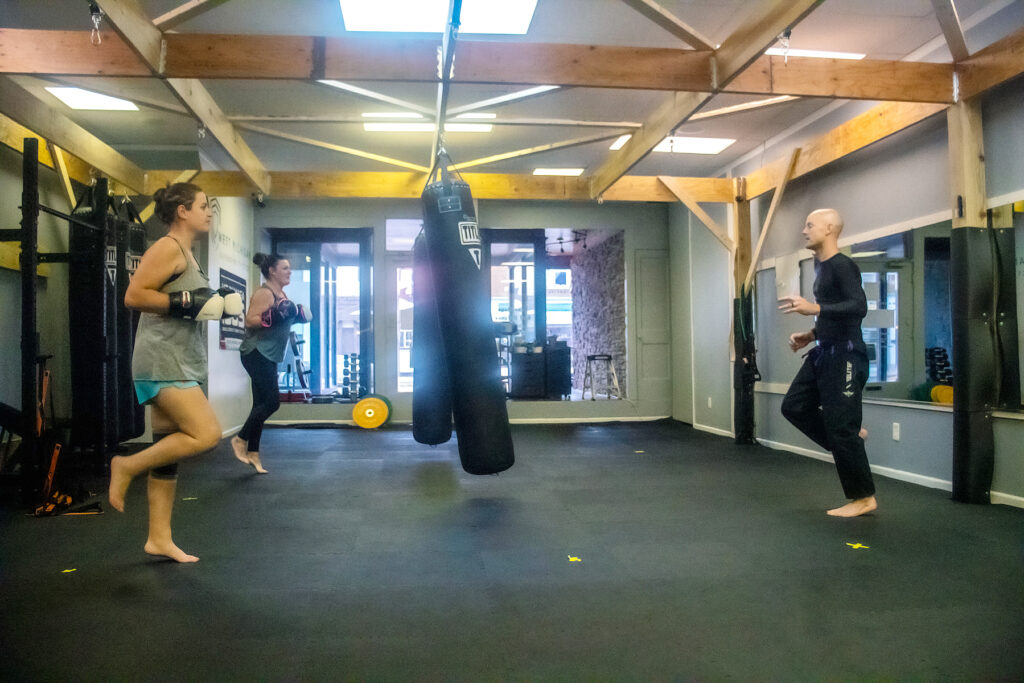 Alec Dakin starts off the cardio kickboxing class he’s currently teaching at West Michigan Defensive Tactics in Greenville with a warm-up before moving on to the punching bags. — DN Photo | Brandon Schreur

“In Hebrew, Krav Maga stands for contact combat,” he explained. “A lot of people hear those words and don’t really know what it means. It’s starting to become more and more known, but, in general, there are still a lot of people unaware of it. The way I put it to them is that it’s a practical self-defense, not a martial art. You’re learning how to defend against a choke, common attacks or maybe how to defend yourselves against someone with a weapon.”

Already offering Krav Maga classes to adult and youth, Dakin hopes to continue spreading the practice to other age-groups within the community.

“One of my future goals is to add a self-defense class for seniors in the afternoon,” he said. “It’s something they might not have access to or feel uncomfortable with in other settings, as it’s typically a younger crowd that’s doing it to them. We’d like to offer it to them. Obviously, being the bedroom community that we are, it’d be nice to give that population something a little different from their regular schedules.”

In the three weeks since reopening, Dakin says classes are quickly filling up.

“We’ve got a decent group of people already coming in. The classes are building. Along with those classes, we’re also doing different seminars,” he said. “In November, we’re doing a women’s self-defense seminar, which filled up in three days. We’re also looking at hopefully adding some (concealed pistol license) and survival courses in the future, just as a way to provide a litany of different offerings to everybody. 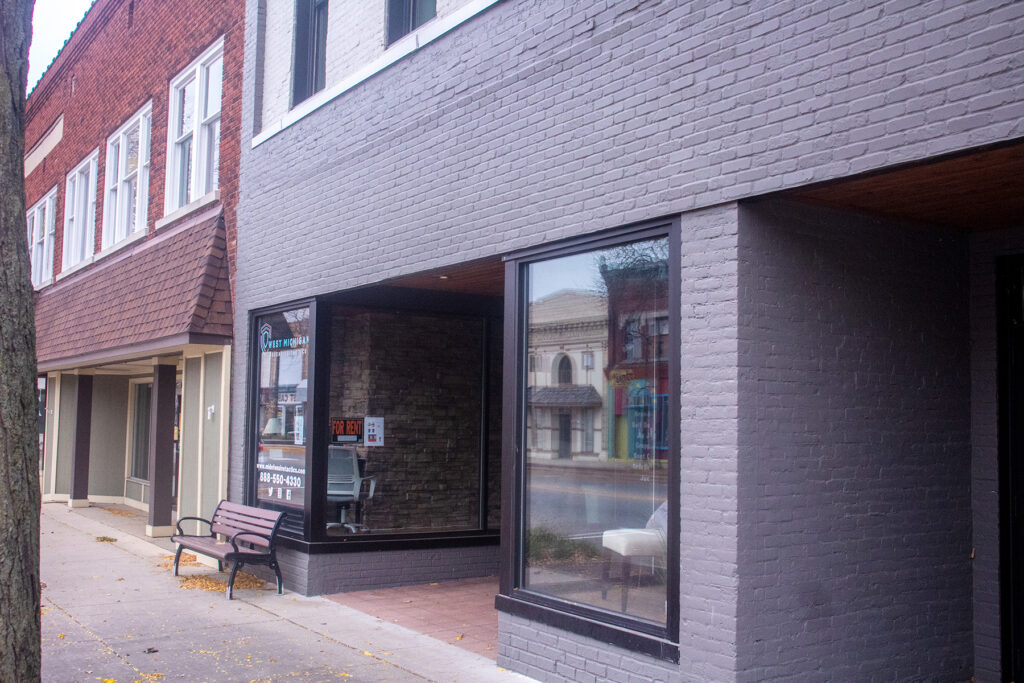 Located at 200 S. Lafayette St. in Greenville, West Michigan Defensive Tactics is now open to the public and offers a variety of Krav Maga, Brazilian jiu-jitsu and other self-defense or fitness-related classes. — DN Photo | Brandon Schreur

“I don’t think I have any intent or plan to grow any bigger beyond this. Once the classes fill-up, I hope to have waiting lists. This is what I want. I like the area that I’m in; it’s a cool downtown spot. I want to be in a small, tight-knit family that’s a place people love to come, train and, hopefully, learn how to defend themselves.”

Nicole Atwood of Greenville, who recently began taking cardio kickboxing classes for the first time, told the Daily News that the atmosphere Dakin created at West Michigan Defensive Tactics is one she finds welcoming and nonjudgemental.

“I’ve been waiting since February for this place to reopen,” she said. “I feel super safe coming here. (Dakin) pushes, but not to an unsafe level or anything like that. You’ll definitely get a workout, but it’s not like having a drill sergeant yell at you. It’s fun.”

Originally from Greenville, Dakin says West Michigan Defensive Tactics is a long-time dream of his that he’s thrilled to see come to fruition.

“I owned part of SureShot Pest Control in Greenville, but I sold my shares in that for this place,” he commented. “This is something I’ve always had a passion to do. I have a story that I don’t really want to share at this moment, but I had some bad things happen to me. I felt like it was my calling to do something and help others learn how to defend themselves. I put all my marbles in one basket and went for it. I spent a lot of money getting it open but, finally, we’re here and I’m able to do my thing, so to speak.”

Information: Visit midefensivetactics.com or reach out to Dakin over West Michigan Defensive Tactics’ Facebook or Instagram page for more information or to sign up for classes.