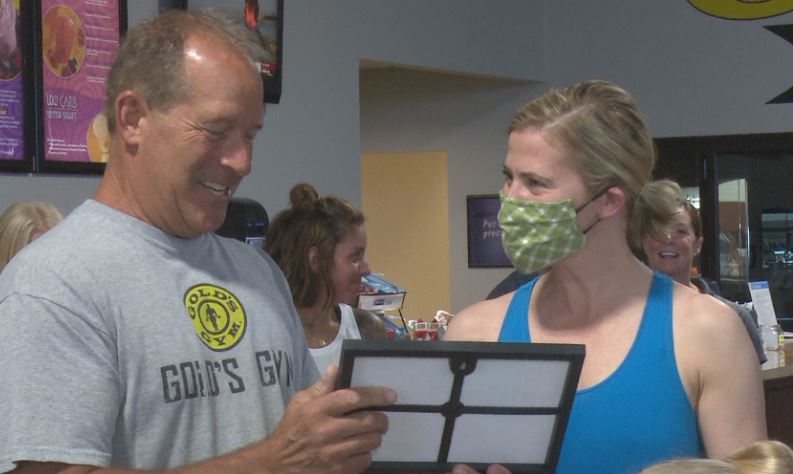 Gold’s Gym hosted a national weight loss challenge starting in January. Among those who signed up, our own evening anchor Caitlin Knute. Little did she know we would be in on the surprise Friday morning when she learned she placed in the top 10 in the country!

Our crew was there, rolling, when she was surprised at the Gold’s Gym in Morton. Owner Todd Grimm revealed the honors mean she’ll eventually win $6,500, although Knute said she plans to donate some of that back to the instructors who made her journey to get back in shape possible.

The challenge is an annual event at Gold’s Gyms across the country lasting 12 weeks. This year more than 600 gyms and 20,000 people participated.

The winners were chosen by Gold’s corporate in Texas, based on total transformation, weight loss, and an essay written by each participant.

Here’s what Knute, who ultimately lost 31 pounds, had to say about what prompted her to make a change in the essay she submitted:

“Growing up I was an athlete. Staying in shape was easy, and somehow I always felt like the “you are what you eat” rule didn’t apply to me. Then, I had children, and things changed, from my metabolism, to making working out a priority. I found myself putting the needs of everyone else first, because I thought that’s what I was supposed to do as a mom and a wife. But, as I fell out of a routine of running and working out, I started gaining weight, and got to the point where I felt like I didn’t recognize myself. I’d gotten out of shape, I was at my highest weight ever (aside from being pregnant), and had no one to blame but myself.

I knew I needed to do something, and I needed accountability.

So, I signed up for the Gold’s Challenge. I told my instructors and my friends in class. The more people who knew, the more I felt like I had to stick with the program.

Starting out was humbling. A former college athlete and triathlete, I was frustrated by how easily I tired at first. But, I kept coming back to the group fitness classes, and mixed in some workouts the program suggested on my own. And gradually, my skills and stamina returned and it got easier and easier.

Meanwhile, I did something new that I’d never done before. Following the suggestions and nutritional ideas Gold’s gave me, I started counting calories. I found an app that made it easy, and made a choice to eat healthier. There were times I struggled to find the balance of eating low carb and fewer calories and having the energy to work out, but my instructors offered advice and guidance and helped me find foods and solutions that worked for me. I steadily lost 1-2 pounds a week while gaining strength and stamina. I felt strong, I felt healthy, I felt accomplished, and I started feeling like myself, again.

In the end, I lost more than 25 pounds, but I gained so much more. I got my body back, but I learned to make my health and fitness a priority, too. I learned to lean on other women and ask for help, and I gained some great friendships through the process.

I can’t say enough good things about Gold’s and this challenge. This was exactly what I needed to make some positive changes in my life, and this gym gave me all the tools and people I needed to make it happen.”

Congratulations to Caitlin and the other winners!

Green Tea For Weight Loss: Know The Best And Worst Time to Consume This Beverage – India.com