This story was written in collaboration with Forbes Finds. Forbes Finds covers products and experiences we think you’ll love. Featured products are independently selected and linked to for your convenience. If you buy something using a link on this page, Forbes may receive a small share of that sale.

Fitbit fans will grumble that comparing the beloved wearable tech device with an Apple Watch is like comparing apples to … anything. And Apple fans will just scoff and roll their eyes. But that doesn’t change the fact that both devices are striving to fill a similar niche—activity tracking and smartwatch notifications for your wrist.

Here’s how the Fitbit Ionic stacks up against the Apple Watch Series 4:

Back when Fitbit bought one of my favorite wearable tech companies, Pebble, fans were assured they’d be seeing assets from the defunct smartwatch again. The Fitbit Ionic is the delivery of that promise. At least spiritually.

Pebble engineers were brought onboard at Fitbit to design an app store for their smart devices like they had for Pebble. The result lifted the Ionic from an also-ran fitness tracker and turned it into a pretty fun device in its own right. From Star Trek watch faces to calculator apps, the Ionic is now at least as interesting as the Pebble it replaced.

The Ionic is also the most powerful device in Fitbit’s stable. Not only does it have the standard fitness tracking you expect, but it also has built-in GPS. That means you don’t have to be tethered to your phone when you go out for a run. And it’s water-resistant, so you don’t have to worry about it getting soaked or showering after a workout.

Most impressive, the Ionic has a five-day battery, letting you hit the pavement without worrying if your watch will make it to the end of a workout or three. The device also has on-wrist coaching videos and can track sleep patterns (since there’s no need to charge every night).

If you’re looking for smartwatch notifications, you’ll get those on the Ionic as well. Though they’re mostly of the “look, don’t touch” variety. Letting you view them, dismiss them, and not a whole lot else. If you’re on Android, you can send pre-canned quick replies to text messages.

The only real issue with the Ionic is the aesthetic. The large rectangular face and stiff rubber wristband are more reminiscent of an early Garmin Forerunner than they are a modern smartwatch.

As a smartwatch, the Apple Watch is second to none. It features GPS logging, even without your iPhone, and is incredibly reliable. Best of all, the game-changing compact heart-rate sensor is just as accurate, if not more so, than any other wearable on the market.

Instead of just nagging you, the Series 4 keeps an eye on when your heart rate spikes and your motion is consistent with working out. Recently, when I thought I started a Nike Run Club run, the Apple Workout app buzzed me a quarter mile in, asking me if I was running. When I confirmed, it filled in the first part of my run and activated to log the rest. As someone who’s always grumbling that if a run isn’t recorded, it didn’t really happen, that interaction was nothing short of revelatory.

My favorite trick, however, has to be leaving my iPhone at home and hitting the pavement. There’s also a dedicated Podcast app, meaning you don’t have to sideload your favorite podcast eps onto the device. With the cellular edition, you can stream them on the run.

The large screen of the Series 4 provides crisp, full color, and, most important, interactive notifications. I can control my alarm system. I can operate lights around my house. I can have Siri fetch information, set alarms, check on packages, and more, all without taking my iPhone out of my pocket. Rather than getting just enough information to know if you have  to pull out your phone, the Apple Watch Series 4 is basically a teeny tiny iPhone on your wrist.

All that interactivity comes with a price, of course. No matter how much you baby your Apple Watch, it’s not going to last more than a day before needing to be recharged. That means an important part of your fitness (i.e., sleep quality) is being ignored.

So which do you get? If you’re in the Apple ecosystem already, the Apple Watch should be the only smartwatch on your shopping list. You can pick up a Series 3 for about the same price as the Fitbit Ionic and you’ll get deeper interactivity with your iPhone. It’s a companion device instead of a tech add-on.

On the other hand (or wrist, as it were), if you’re using Android or don’t like Apple, the Fitbit Ionic offers better battery life and sleep tracking that the Apple Watch can’t deliver. And while it’s not a lot less expensive than the Apple Watch, it is still cheaper. 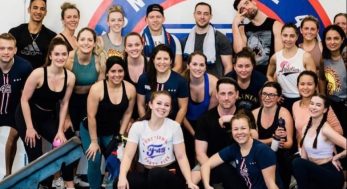